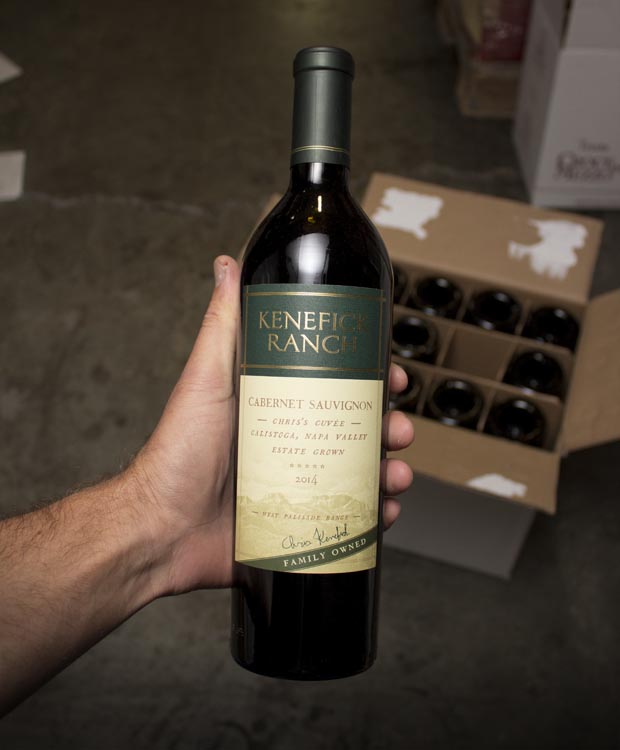 Go to a music playing device.

Select song that rocks your world.

It’s that easy. 50% OFF Kenefick Ranch??? Are you crazy? With 93 POINTS from the Wine Advocate? Why/how are we even doing this? If MASSIVE, inky, colossal Cabernet is your cup of tea, do not do anything else at this moment than GET some. Wow!!

KENEFICK, with its fantastic vineyard in Calistoga, much like Stagecoach down south near Napa, is a hyper-high-end source of grapes for many of Napa’s most gotta-have-it producers. Kenefick supplies such lofty producers like EISELE (formerly Araujo), Nickel & Nickel, Caymus, Cade and many more. They keep about 10% of the highest quality Cabernet for themselves, and we miraculously scored a few cases of the Chris’s Cuvee that we INSIST you have if you love rich, mocha-laden, blackberry pie and cassis-y Cabernet, with silky, low-acid texture, lavish spice and mouth-coating flavors, with remarkable opulence.

A crazy deal --- we’re not saying anything else! Good luck!

Kenefick Ranch is quietly one of the most impressive vineyard sites in Napa Valley. Nestled against the Vaca range in Calistoga and adjacent to the legendary Eisele vineyard.
Previous Next

Dr. Tom Kenefick's family were originally farmers in Ireland, and they later settled in the Midwest – first in Iowa and then in Minnesota. While Tom, a third-generation physician, farming was always a source of pride for the family, who valued its legacy of hard work and a closeness with the land. He headed to the University of Minnesota Medical School, after which he conducted his residency at the renowned Mayo Clinic. His training honed his strict attention to detail and disciplined approach, both of which influence Kenefick Ranch’s wine 50 years later.

Dr. Kenefick was a practicing neurosurgeon in San Francisco when he first visited the area in 1970 and fell in love with the Napa Valley. Eight years later, he found this remarkable property, a 250-acre Calistoga ranch. Tucked into the foothills of the craggy Palisades, the ranch looked out onto a beautiful valley set within two mountain ranges.

“I must have had a great guardian angel,” he remembers, “...I didn’t know enough about viticulture at that point to make such a good decision.” With a longstanding interest in wines, particularly Bordeaux varietals, he began to pursue his new passion for winegrowing.