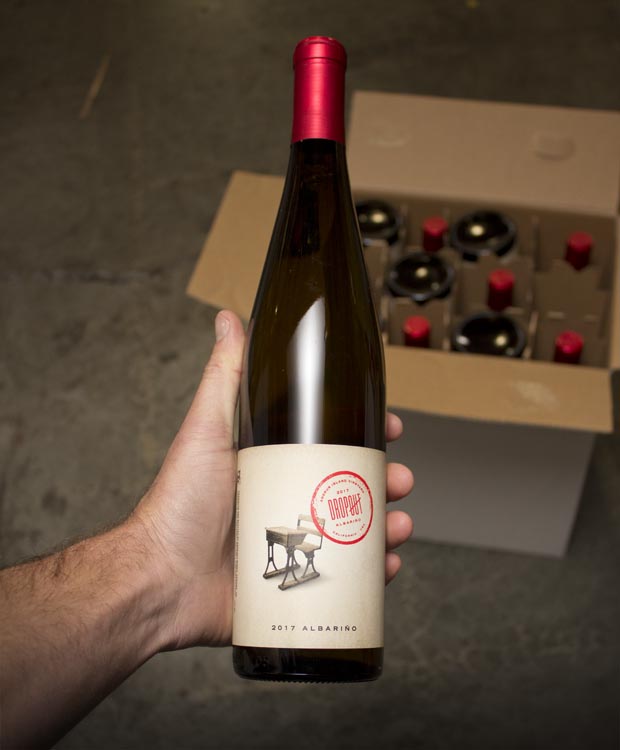 Patio pounder alert! The new vintage of the lip-smacking, way-too-easy-to-drink ALBARINO from Jon Keyes! You'll be poolside in no time! THE PRICE!!

It’s back!! The fantastically zippy, mouth-awakening, hyper-fresh white made by Jon Keyes, whose resume includes stints at Two Hands (Australia), as Thomas Rivers Brown's assistant winemaker at places like Outpost and Schrader, and who is currently making wine with Mark Herold for many of his high-scoring, much-collected wines. And he "dropped out" of college to do all this --- thus the name.  Albarino, of course, is a rare varietal in California, and this is a delicious version packed with freshness but also a bit more turbo-charged fruit than you normally get with the Spanish versions. Plus it's sourced from the much-coveted vineyards of Markus Bokisch!

Chill this down and then HOLD ON. Lemon peel, almonds, subtle pineapple, a salty sea air note, tangerine and pear all held together in a BRISK, zippy, tangy frame --- actually, here’s the deal, we’re going to grab our Tommy Bahama chair and set up with a glass and a copy of the new Wine Spectator in the parking lot of the warehouse, right where the taco truck pulls up. See ya!!

Warm weather is upon us and that means you'll need some crisp, zippy whites to sip by the pool, on the beach, at the lake, wherever the sun is shining!
Previous Next

After studying chemistry at UC Santa Barbara, winemaker Jon Keyes dropped out of college to take his first winery job with California's ultimate boutique winery, Sine Qua Non. He then traveled to Australia, honing in his winemaking skills down under with Two Hands Winery in the Barossa Valley. He then returned to assume the position of Cellar Master at Napa Valley's Outpost Wines, under the guidance of winemaker Thomas Brown. Currently, Jon is making wine for winemaking pioneer, Mark Herold.

Though he has a remarkable resume, the person he is inspired by the most is his wife. When Kaitlyn had a desire to start an Albariño label, Jon couldn’t wait to begin another fun project. And that’s exactly what this project is, fun! Since Jon dropped out of college to pursue his passion for wine, Dropout was a fitting name. It’s also a bit ironic because Kaitlyn is a 1st grade teacher and a strong proponent of education. The common denominator that drove this project was their mutual love for Albariño, which is evidently expressed in the bottle.