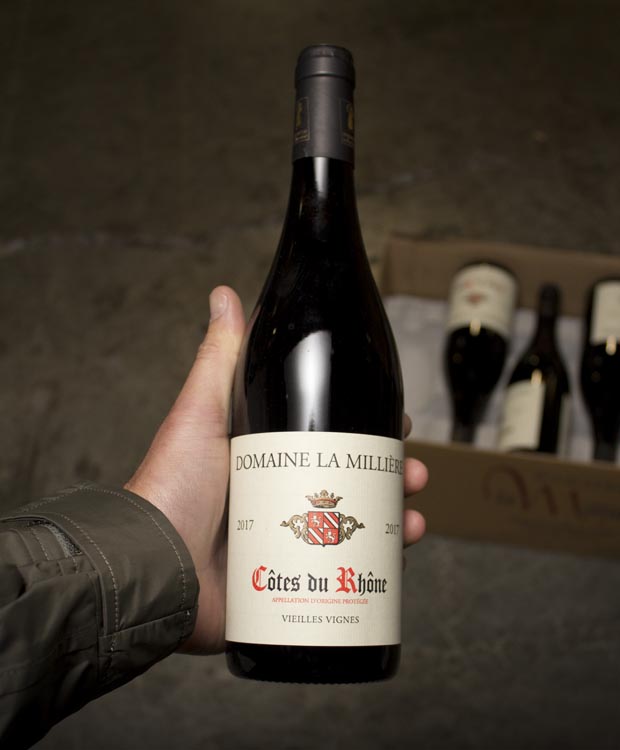 Best V-day present ever? 4 cases of this!!! Kidding, 2 should be fine --- at $13, ARE YOU KIDDING? Domaine la Milliere!! Rightly a Last Bottle client fave “house red” for many years, this rock-solid, old-vine (Vieilles Vignes), amazing-for-the-money, juicy masterpiece of overdeliverance (just made that up, good, huh?) would cost you WAY MORE elsewhere! BOOM! Just hit the warehouse direct from the Domaine!

It’s ALWAYS a good day when we get out the new vintage of Milliere, oh yes! 2017 is a terrific vintage in the Rhone (although very small, there is WAY LESS than a normal vintage, but KILLER quality) --- direct-imported by us to save you a bundle. A fifth-generation winemaking family, the Arnaud family makes juicy, succulent, spicy and muscular Cotes du Rhone (from 50-100 year-old vines!) that might be described as “baby Chateauneuf-du-Pape” (the vineyards are located just north of the CdP appellation). Outrageously deep and intense for anything NEAR this price range. Wow! We’re talking blue fruits, sweet herbs, candied red fruits, mint and clove notes, in a juicy/grapey texture and a satisfying finish. You can keep this for a few years, too, easy, it will only get better! Beautiful, and such a drop-dead rocking bargain! Woo hoo! Super limited this year! Don’t miss!

In the southern part of the commune of Orange, is the area called “Le Grès”, the Côtes du Rhône vines are aged from 50 to nearly a hundred-years-old. Southwest facing, they flourish in stony soil with a mix of clay and sand.

It was in the 1940s that Fernand Arnaud bought La Millière. At that time on the estate, vineyards were side by side with fruit orchards.

At the age of 14, Aimé, Fernand’s son, decided to devote his life to vines and wine. Over time, Aimé, aided by his father’s advice, transformed La Millière, making the estate fully viticultural. For him, his vocation was laid out: he would be a vinegrower-winemaker.
Michel, Aimé's son, took over La Millière in 1983, making him the 5th generation of Arnaud vinegrower-winemakers. Since then, Michel has continued to apply the knowledge handed down to him by his parents and grandparents. In his footsteps comes Vincent, his eldest son, who has just joined the estate. He continues the family history that has been at the heart of La Millière for many decades.