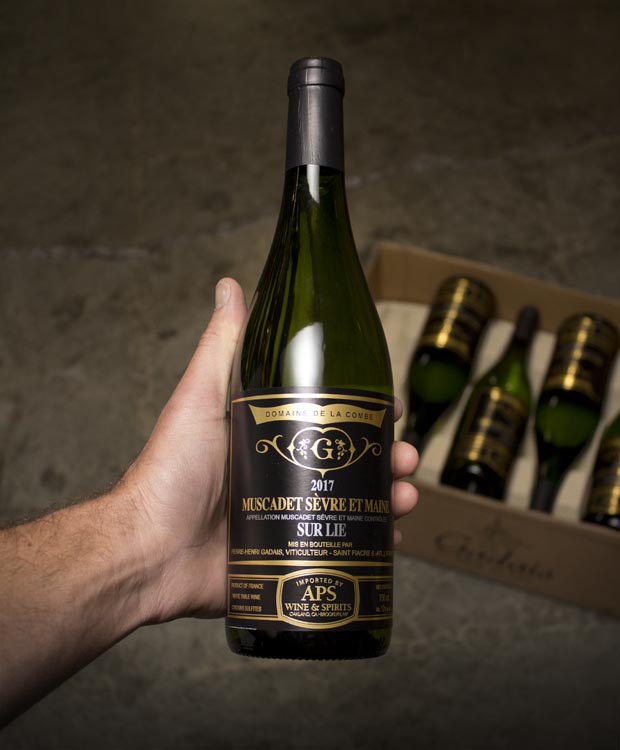 Pierre’s Muscadet (muhs-kuh-dey), as noted above, from this brand-new and spectacular 2017 vintage is as CLASSIC as you can get, and it’s barely even available in the U.S. (we bought everything we could find, as we do every year…). Want a masterclass in Muscadet? FOR $12???? Here you GO! This clearly has the fantastic, slightly saline tinge so definitive of Muscadet that pairs beautifully with its subtle pear and grapefruit flavors, racy freshness, and electric vigor. Anyone who bought the savory ‘15 from us a year or so ago will already be all over this --- Muscadet is coming back in a huge way and this is simply amazing for the price!! The PERFECT poolside quaffer, beachfront sipper, grilled shrimp BBQ dinner, day-trip-to-the-oyster-farm weekender….trust us...impossible to put down!

Props to those of you who manage to score some...not a lot to go around!

Nestled in the cradle of the Muscadet appellation between the two rivers of Sèvre and Maine. The slopes of these river valleys give the vines an unique exposure and, after centuries of erosion, they grow on a terroir of schist, gneiss and mineral rich orthogneiss, a composition of soils leading to Saint-Fiâcre being considered one of the best sites for Muscadet.
Previous Next

Pierre-Henri Gadais is now really making his mark at the helm of his family’s Domaine in Muscadet. He is in the process of converting to organic production and experimenting with a new ‘natural’ cuvée called Melon Blanc. Probably not the most fashionable place for a young winemaker but he is genuinely enthusiastic about the potential of his native region and if you want a bright, saline, food-friendly white to freshen the palate, then remind yourself how good proper Muscadet can be.