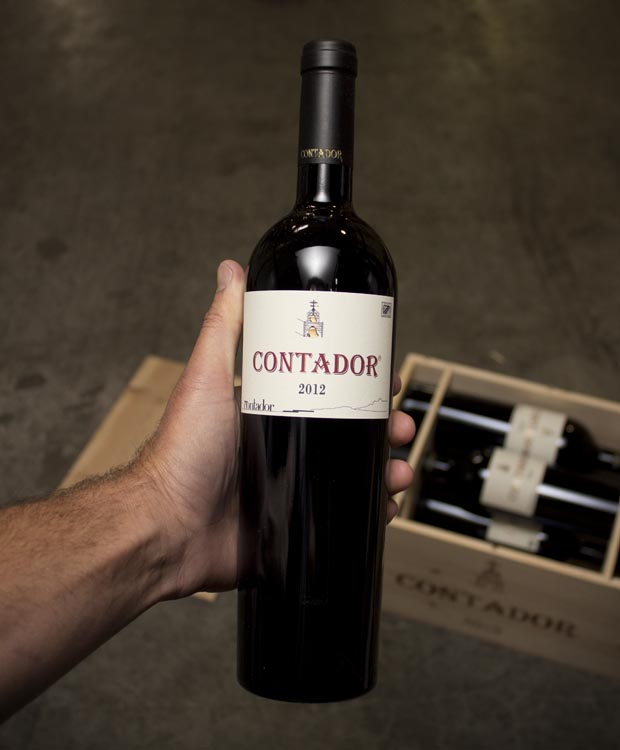 COLLECTORS! Hold on to your baseball caps!!! Wow!

Contador is more or less on the same collector and super-high-scoring level as the nearly-mythical PINGUS (although that is around $900+) and we are utterly amazed to have grabbed a small parcel from our amazing Spain hookup (huge props, dude, thanks again). Both are Tempranillo at its greatest, not made every year, and barely obtainable most of the time. Read an excerpt of the 97-point review on this wine from Wine Advocate:

“...the 2012 Contador has an intoxicating nose of violets, lilies, blueberries and black cherries, with great harmony, denoting superb elegance. The palate is silky, with world-class tannins and texture, focused, clean flavors, very good balance and gob-smacking power and elegance. A rare combination. This is truly other worldly.”

Buy this for the experience, but buy it to collect too -- you’ll NEVER see it priced anything like this again. Benjamin Romeo is the legendary winemaker of Artadi (Google it) and this is his baby since only 1995, starting by making wine in his parents garage and aging in a centuries-old cave. He became an instant cult hit when both the 2004 and 2005 scored 100 POINTS from Wine Advocate. And here we are…stunned to have a few cases of the ‘12 to offer!!

Jaw-dropping, head-spinning wine. Drink it now or over the next two decades, but if you drink it now, make sure you have a buddy with you in case you REALLY start to trip. Kidding, but this is serious, intense, blockbuster wine!! WHAT. A. PRICE! Incredible! While it lasts…!

Robert Parker’s Wine Advocate awarded 100 points to the 2004 and 2005 vintages of Contador made in his parents’ garage! Now that is a true garagiste winemaker!
Previous Next

Bodega Contador began in 1995 when Benjamin Romeo, winemaker and grower, acquired a centuries-old cave carved into the rock beneath the Castle of San Vicente de la Sonsierra, located at the foot of the Sierra Cantabria mountain range in La Rioja Alta, west of Rioja Álava. In 1996, Benjamin made the first vintage of his “La Cueva del Contador” wine and started to buy vineyards for his plan to become a “bodeguero”—a wine producer. Benjamin was the winemaker at Aratadi from 1985 to 2000, where he was able to apply his skill and continue to hone his craft. In 1999, he made the first vintage of “Contador” from vineyards he acquired.
In 2000, after seeing these first wines favorably received by the market and press, Benjamin dedicated himself full time to his personal project.
In collaboration with the architect Hector Herrera, Benjamin designed and opened a new winery in June 2008, to coincide with the summer solstice. The three floors or terraces mirror the original slopes of the site where it is located, enabling both fruit and wine to be moved by gravity.