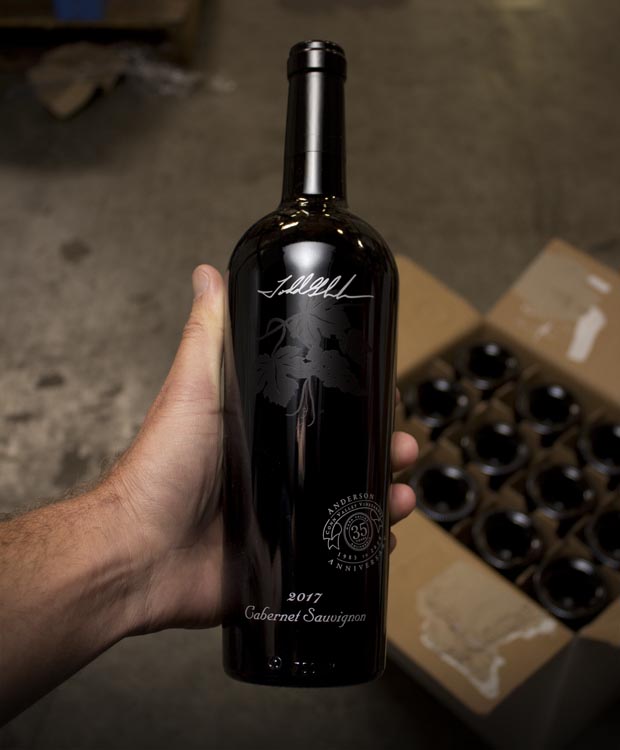 Most extreme Napa Cabernet RELOAD -- last time we sold out in 43.6 minutes...don’t let it get by again...we’ve been trying to get more for months...just a word of advice from your trusted confidant in all matter vinous and frugality!! Anderson’s Conn Valley CABERNET!!

Remember that day back in March when you bought the ‘17 Conn Valley and you got the box and tore it open and tried it and freaked out how delish it was and then emailed if we had any more and we said: “sorry, that was gone in 43.6 minutes”? Well, NOW, today, this lovely Sunday morning is the time to correct that. Woo hoo!!

Anderson’s Conn Valley -- they’ve been making absolutely rock-solid, high-scoring, well-priced wines since 1987 and even at their original pricing of $58, represent amazing values in the world of Napa Cab, which we all know can quickly escalate into Rolex territory. Ha! Not today! No, no -- this 2017 is firing on all cylinders now, and will for the next 5-7 years or so. PLUSH, sink-into-the-velvet-couch smoothness, warm black currant fruit, dark chocolate, earth and spicy French oak, this 96% Cabernet hits all the right buttons...BUT!! As noted, we generally don’t keep this around for long. Good luck!

Family owned and operated since 1983, the Anderson's Conn Valley 40 acre Estate is located just south of Howell Mountain in Conn Valley. Just 3 miles or 10 minutes east of downtown Saint Helena, which feels worlds away from the hustle and bustle of busy tasting rooms.

Anderson's Conn Valley Vineyards in Napa is just a short drive from downtown St. Helena. It is a charming timepiece of a traditional Napa winery, featuring world-class fine wines at affordable prices. Conn Valley Vineyards is lucky enough to sit in the lap of Napa Valley which affords our talented winemakers access to some of the finest grapes in the world. With this year’s vintage offering exceptional balance and complexity due to extended maturation on the vine, Anderson’s Conn Valley Vineyards has produced some truly spectacular wines; including crisp, vivacious white wines and lush, textured red wines.